Way Back Home About This Site

There was only one singer who influenced me. I tried to sing like her all the time because everything she did made sense musically, and that singer was Connie Boswell.

Connee After the Boswell Sisters 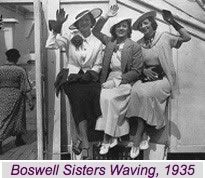 February 12, 1936 – The Boswell Sisters make their final recording together. The Irving Berlin lyrics seem prophetic. The first number features Connee, who hereafter will be on her own, carrying the lead in “Let Yourself Go.” On the second number the Sisters harmonize throughout the song, a fitting way to declare their new lives with “I’m Putting All My Eggs in One Basket.” Vet is pregnant at the time of the recording.

Thank You!
Thank you for stopping by! Bozzies.com and Bozzies.org are non-profit organizations dedicated to keeping alive the memory of the Boswell Sisters and their wonderful contributions to the history of music and performance. Our mission is to pull together the best Boz content available for the enjoyment of all Boswell Sisters fans, and we hope to inspire those new to the Boz as well! We greatly appreciate any donations to help keep us Bozzing, and we truly hope you are enjoying your visit. As always, please feel free to contact us with any questions, comments, or suggestions!
About this site Copyright © 2016, Bozzies.com, Bozzies.org All Rights Reserved. Contact: Stinceria@Bozzies.org